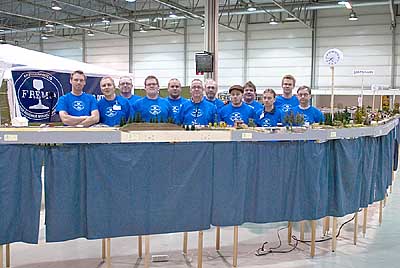 FREMO is not totally new in Finland, The first Finnish FREMO modules (although using German prototype) were constructied in 1988, but the time was not ready yet for modular concepts like FREMO. The second wave started in 2001 when Johannis Likos showed his greek FREMO modules at Lahti exhibition. Later in 2004 Martin Janda from Zababov club studied at Helsinki University of Technology and introduced the FREMO concept to Tapiola club members. The most significant start took place under the leadership of Kari Hovinmaa, Johannis Likos and Kari Saalasti, a small group of individual enthusiast from Tapiola club, got together and started the FREMO module construction. Today (2016) we have close to 70 FREMO modules, including five stations and two fiddle yards, and more are under construction ranging geographically from Helsinki to Oulu in the northern part of Finland.

To guarantee interchangeability of the few modules we have at hand the informal FREMO-FIN group has intentionally tried to limit the number of variations to a minimum. We are only suggesting the use of F96 interface and H0 gauge, and no catenary.

Regarding wheels, we have a somewhat controversial situation in Finland. Most Finnish modellers are running commercial ready-to-run equipment of foreign prototype, because practically nothing is available ready-to-run in the Finnish outline. Almost all of the Finnish outline rolling stock is actually scratch or kit built. The problem is having nothing between ready-to-run foreign outline and self built finnish outline rolling stock. This leads to a problematic situation and strikes an elitic or finescale impression over all Finnish outline modellers, and hence of course to FREMO-FIN. This is not what we want. We need more enthusiasts, but we do not wish to scare the would-be FREMO enthusiasts by insisiting on using finescale wheels, three-point suspension etc. All kit built Finnish outline rolling stock already has RP25/110 wheels, as those are easily avaliable in almost any size, yet we wish to have the possibility of using commercial underframes of wagons or locos. Thus we are closer to FREMO H0-Europa NEM than any of the fine scale versions of FREMO — yet we run with brass locos — see the problem?

This also leads to problems with couplers. Rolling stock with commercial underframes have NEM couplers or at least NEM coupler pockets. The brass modellers have the screw link imitations or Kadee couplers and are not so willing to put the doghouse sized NEM socket under the buffer beam. Although our standard insists on NEM couplers we have to give lattitude here and wait what the defacto coupler will turn out to be.

FREMO meetings are not intended for the public. So far we have only being running at model exhibitions. The slow phased action on a FREMO layout gives nice contrast to other, mostly merry-go-around layouts, usually on show at Finnish exhibitions. Unfortunately the nature of a public shows is considered by some of us to force us also having something moving all the time. The slow phased switching on a lonely branch line using wagon cards is not close to every finnish FREMO enthusiast's heart — yet.

The Finnish FREMO-FIN has just started, we are now running using timetables and fast-time clocks, things that actually make FREMO layout a FREMO layout. Waybills and wagon cards we don't have yet, but perhaps one day...

The "Stammtisch" is on first Tuesday of every month at about 18 o'clock at restaurant "Vltava", Elielinaukio 2, 00100 Helsinki. Please contact in advance if you are coming (contact information below).
Due to Corona pandemic all meetings are cancelled until further notice!


Text, drawings and photos are protected by copyright laws. Technical solutions, methods and source code are public domain only for non commercial purpose. All development has been carried out during our free time, mainly funded from our own pocket and with non selfish goals, so the use of this material for profitable use (including construction for a friend aginst a fee) is forbidden without written permit from us. The pages contain errors, so, if you use the data given, you do so at your own risk and responsibility. If you further develop material found on these pages you must put it on display without fee e.g. to a freely available web page. We expect a note about this also.
Pages tested with W3C validator -- didn't look good ;)